I adapted from PH’s genoise recipe this time, leaving out the milk. The cake is softer and more moist than the previous one. It is slightly harder to roll as a result, cracking more easily. It is also slightly sweeter, almost too sweet. I’d add a little salt or cut the sugar next time.

The batter was stiffer than Glace’s, making it harder to spread into the sheet pan. I was too lazy to make it perfectly smooth and a little worried about deflating the batter, so the baked genoise was uneven. At 10 minutes the cake was done, its surface barely browned but springy to the touch.

I’ll report back on the taste after the roll is chilled enough, but the scraps tasted good 🙂

Update: It tastes sweeter than GTRBR v. 1. The cake is more moist and tender, but the whipped cream made it sticky much faster than the other genoise. I will try 100g sugar and 15g green tea next time. 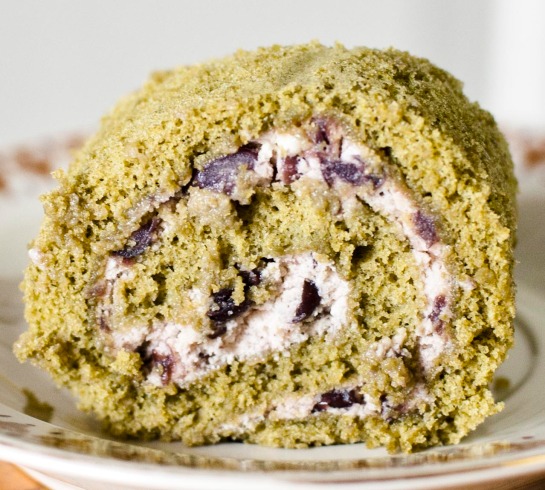 Line bottom and sides of a 30 x 40cm sheet pan with parchment paper and preheat the oven to 190C.

Place the eggs and sugar in a saucepan over a pan of simmering water. Whisk until sugar is dissolved and mixture is fairly hot, 54-60C. Transfer to a kitchen mixer and whip on medium speed, until cool to the touch, fluffy, and tripled in volume, about 8 minutes. You know it’s right when the batter is drizzled back into the bowl, the marks take 10 seconds to disappear.

Fold a little batter into the melted butter and set aside.

Sift in 1/3 of the flour each time, folding quickly and gently, and add the next portion when just a few flour streaks remain. When all the the flour has been added, drizzle in the butter mixture and fold just until incorporated.

Pour the mixture into prepared pan and smooth the surface, it will not flatten out during baking. Bake at lower third rack of oven for 9-11 minutes, the top will show a little color but shouldn’t brown too much. Transfer pan to a cooling rack for 3 minutes, then remove the cake from the pan and let cool completely, you may leave the parchment paper on for now. When cool, remove the parchment paper and reserve it.

Whip the cream in an ice bath until it holds stiff peaks. Add the red bean paste and combine, the cream will soften a little.

Lay out the layer cake, darker side up with a sheet of parchment paper underneath. For the 30 x 40 cm cake I will be rolling the long side so I end up with a roll cake of length 40cm. If the edges on the long sides are too ugly and you care about that, trim them. Eat the scraps. Spread the red bean cream evenly onto the cake, making the cream layer thinner near the last 1 inch of the cake to be rolled. Begin rolling, using the parchment paper as a guide. To get a extra-round roll, tuck the top layer of parchment paper under the roll and push that in with a long thin object while pulling at the bottom layer of parchment, like so.

You can serve immediately, but it is easier to slice and tastes better after an hour in the fridge. The roll lasts up to 3 days in the fridge, wrapped airtight to prevent drying out. The outside can be covered with more whipped cream to seal in the moisture.

Hi! I'm from Singapore and working towards becoming a pastry chef. I believe that formal education is not a must, as the internet is full of brilliant and generous minds, and books will fill up most of the remaining gaps. I work hard and learn from my mistakes, if you would like to hire me, or chat about desserts and life, drop me an email at ahboing at gmail dot com :)