Two things I learnt from this recipe:
– Transferring the choux batter to a piping bag and using that to pipe into another piping bag eliminates air pockets
– Misting the choux with oil before baking will eliminate ripping and create evenly shaped choux
– Cooling the choux dough allows it to be piped neater

This choux had custardy insides, and were hard after being refrigerated with pastry cream inside. The baking time is incredibly long – 35 minutes at 160C, or until full onset of Maillard (What does that mean?) and then a further 25-30 minutes with the oven door ajar. The choux started to brown too fast and I had to turn the temperature to 125C for the drying round of baking. Also, the bottoms were caved in, I’m not sure if that’s normal. 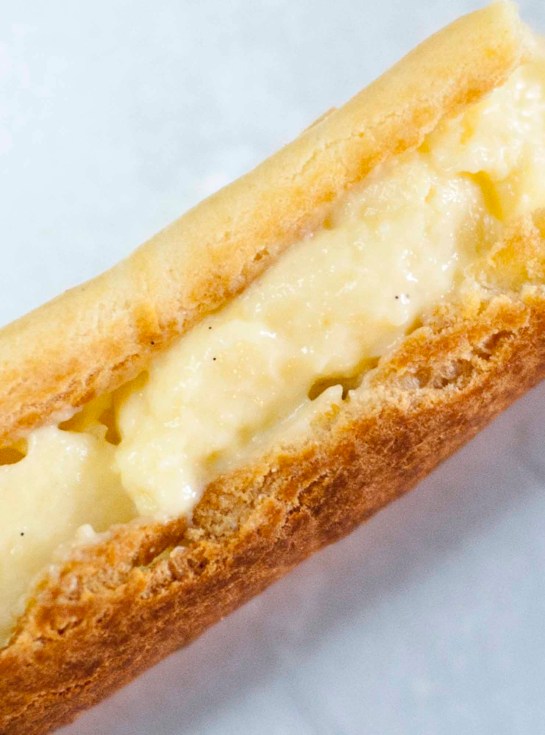 Here’s where I deviated from the recipe. Thought I would have learnt by now!:
– Substituted milk in place of the milk powder and water
– Not freezing the choux before baking (frozen and defrosted ones turned out more puffed and less custardy on the inside)
– Not cooling it immediately in the ice bath (about 5 minutes wait in room temperature)

The main reason I wanted to try this recipe is because it produces such evenly shaped choux. I will be trying Pichet Ong’s recipe next due to the shorter baking time, and also attempt to freeze the unbaked piped choux dough.

Update: I tried Pichet Ong’s choux, they are dengerously delicious.

Hi! I'm from Singapore and working towards becoming a pastry chef. I believe that formal education is not a must, as the internet is full of brilliant and generous minds, and books will fill up most of the remaining gaps. I work hard and learn from my mistakes, if you would like to hire me, or chat about desserts and life, drop me an email at ahboing at gmail dot com :)